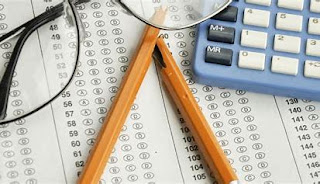 No Child Left Behind imposed one-size-fits-all standardized testing on every public high school student in the nation.  It's successor, the more relaxed Every Student Succeeds Act, still demands state established testing of all but private school students. (This insures that most powerful people's children endure no such indignity.)
Here's how we might take unexpected advantage of this federal imposition. Require every political candidate to take the same high stakes battery of tests imposed on their state's high schoolers. Should they refuse the tests, they can't run.
To make sure no 'public servant' escapes this scrutiny, let's also require aspiring high level government appointees, such as a wannabe U. S. Secretary of Education, Secretary of State or Supreme Court Justice, to also take the tests.
I'm not proposing they must achieve a minimum score to run. (Though I personally like the idea.) Just that they must take the tests and the resultant scores be made very public. Allow no exceptions. No matter how many terms a politician has been in office, he or she would be forbidden to run again until they are tested and the results published.
Voters will know how the respective candidates compare. Before being allowed to run again for President, for example, Mr. Trump would have to take the Florida high school tests. Though I can't imagine this "very stable genius" not acing them. (Of course if Trump's scores were low he could immediately claim the tests were fixed.) If Biden should choose to run for reelection he too would have to take, in this case, the Delaware tests. His scores would help clarify to what degree, if any, he has been addled by age.
We wouldn't have to use the more relaxed Every Student Succeeds standards that now prevail. We could revert to No Child Left Behind national testing and require the Common Core tests. Here we would not only be testing the candidate's math and reading, but also subjects like foreign language, economics, the arts and even physical education. I personally like this model better because voters could make national comparisons. Imagine, for example, voters could directly compare Marjorie Taylor Green' s scores with those of Alexandria Ocasio-Cortez. Or we could lay Trump vs Biden scores side by side, should that be relevant in 2024.
Alternatively, we could design specific tests for each high office. One for aspiring Senators, one for House membership, etc. We could turn to ETS, the Psychological Corporation or what have you, to craft these tests for each office sought. Imagine, for instance, aspiring U. S. senators having to pass muster on American history, law, principles of finance, knowledge of other nations, climate change, problem solving, listening comprehension, science, social science, etc. Wouldn't that be helpful for voters?
We might also develop general questions for all office seekers based on our national experience. Imagine ones like these:

1. Given an unprecedented federal budget deficit, the best course of action of those listed is to: a. borrow more money from China  b. cut another trillion dollars in tax revenue due from the wealthiest Americans  c. slash Social Security benefits  d. tighten the nation's belt and spend only what we have.
2. If an attractive intern offers sex, a public official should:  a. quickly take him or her up on it before they change their mind  b. accept, but make sure the intern's clothes are laundered afterward  c. politely decline  d. ask them what they mean by "sex."
3. If, as a member of Congress, you plan to have our schools emphasize “character education,” the best individual upon whom to base the curriculum would be:  a. J. Edgar Hoover  b. Richard Nixon  c. Bill Clinton  d. none of the above
4. If an attack on the US originated in Afghanistan, the best course of action would be to: a. invade Iraq  b. invade Iran  c. invade Canada  d. invade nobody

We could also require every aspiring state Secretary of Education to pass the same battery of tests his or her state requires of aspiring teachers. In Pennsylvania, for example, they would have to pass separate NTE basic skills tests in Reading, Writing, and Listening Skills, (The later would be a tough one for any politician.) They also must pass a knowledge of pedagogy teaching test in their chosen area , such as elementary, math or social studies. (Here, I recommend the elementary ed exam because it focuses on knowledge of pedagogy and child development.) Why require passing scores for this battery of tests? Because any teacher who has passed them should not be required to accept as a leader someone who can't?
Of course, in dealing with aspiring politicians, dishonesty and cheating is of urgent concern. Safeguards clearly are required. We must be absolutely certain that our subjects don't cheat. And we must keep in mind that a majority of them would be unaccustomed to doing anything honestly.
That, in broad outline, is the plan. But it needs filling in. Assuming that you like the general idea, do you think aspirants for public office should take the same tests they prescribe for others, or a brand new tests custom designed for the position desired? And should we try to measure candidate's wisdom, rectitude, practical knowledge, technical knowledge, sexual cravings, dogmatism, or what?
You also might like to suggest specific test items. They need not be multiple choice as exemplified in this commentary. Any type questions typically found on standardized tests are welcome. Post your thoughts and suggestions as comments.
To examine other education policiesy issues, interesting articles are available at both  www.newfoundations.com and www.newfoundations.net. They share a common index.
Posted by boethius at 12:03 PM