Indoctrinate (noun)
1. to instruct in a doctrine, principle, ideology, etc., especially to imbue with a specific partisan or biased belief or point of view.

Is it indoctrination if a professor deliberately sets out to change student opinion? Or must they be deliberately pushing an unbalanced, partisan or biased point of view? Perhaps we should also ask, if students fail to acquire more refined opinions have they really been educated?

A key factor is whether or not the professor indicates that he or she is expressing their personal opinion. A professor teaching a film class told me he recently showed a clip that coincidentally involved a suicide. A number of students spontaneously expressed the opinion that suicide was cowardly. The professor responded, saying that in some circumstances suicide could be understood as the ultimate expression of will.

Is this response indoctrination? I don’t think so. He only suggested another way of looking at it. And, by expressing this view, he provided students with the opportunity to reconsider.

The ultimate expression of will?
What about this being a film class? Suicide was hardly in the course syllabus. Should professors withhold their opinion when a topic strays like that? Should a professor of mathematics, for instance, avoid expressing an opinion on, say, holocaust denial, if it somehow comes up? Of course his or her silence would constitute a lesson in itself.

I remember my 9th grade biology teacher telling our class that his fundamentalist religion prevented him from teaching biology from an evolutionary point of view. Subsequently he struggled mightily to teach the subject without mentioning evolution.

A biology teacher dodging this centrally important topic is patently ridiculous. But he was the only high school teacher I ever had with the courage to take a moral stand on anything. The rest conspicuously dodged moral commitments; and by so doing taught moral cowardice.

The type of teaching engaged in is another consideration. Consider teaching students how to do something. Biased instruction in how to type teaching are typically minimal. Let’s consider a straightforward example: how to pack a parachute. I observed this type of teaching at the Parachute Rigger’s School, Fort Lee, Virginia. The instructor’s job is to make certain all students follow the exact same time-tested procedures.

There is one best way and master riggers repeatedly remind students that every parachute must be packed in exactly the same way. Lives depend on it; and that includes the packer’s life because he or she has to periodically jump with one of their own randomly chosen chutes. The official motto of Army parachute riggers is: “I will be sure always.” And they had better be.

A parachute rigger in his trademark red cap.
Do professors teach anything as straightforward as parachute rigging? Sure they do. Mathematics, engineering, foreign languages and the sciences come immediately to mind. Properly using a sling hygrometer (it measures relative humidity) is not a matter of opinion. Neither is balancing a chemical equation or computing structural stress loads. And professors teaching these kinds of skills have the least opportunity to give themselves over to indoctrination.

But teaching how is not always one-dimensional. At times there are several acceptable ways to do things. I was an apprentice barber, for example, and I learned various ways to produce a first-rate haircuts. The master barber resisted the temptation to only teach me the one he favored. He demonstrated all the techniques and it was my job — given individual customer characteristics —to discover which ones worked best for me. Of course he also made it clear there were some things you must always do and some you must never do. Most were related to hygiene.

I was also told to choose my own tools. It was a multi-chair shop and varieties were available. I tried them all. (This was more choice than I ever had as a secondary school teacher. There district “leadership” chose my teaching tools. Chief among them the textbook.)

Even when teaching how is carefully done, however, professors can be accused of indoctrination.  Here is some teaching how that I did that could have backfired. To improve their ability to appraise educational policy, I taught students how to identify slogans. I defined them as statements containing vague key terms that can be variously interpreted. Because of their vagueness they can generate a broad but very shallow consensus. Then I provided them with the mission statement of the Red Lion, PA. Area School District. (I used Red Lion’s because I taught there.) Here is Red Lion’s statement: “In partnership with our communities, to prepare all students to reach their greatest potential, thus becoming responsible and productive citizens.

I asked them to identify any slogans in this statement. Then I told them to list any unresolved questions that these vague terms concealed.” Students typically came up with questions such as these: What does this “partnership” amount to? Who decides what counts as a “community?” What sorts of “potential” are to be developed fully? And why assume that developing student “potential” always produces “responsible” and/or “productive” citizens?

Teaching students to think in this way might make some school administrators unhappy. It also provokes parents who feel threatened by critical thinking. In a sense, then, this lesson provoked “dangerous” thoughts. For example, upon learning about slogans one of my students blurted out: “The Ten Commandments!” “What about them? I asked. “They’re all slogans!” she replied. 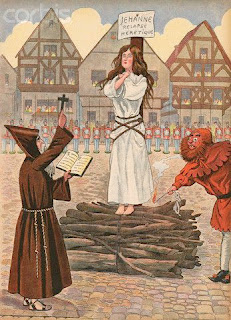 One reaction to critical thinking

Insights such as these can be unwelcome. But teaching critical thinking is hardly indoctrination. It is an antidote.

The temptation and opportunity to indoctrinate increases when it comes to teaching that. In other words, teaching “facts.” Why? Because what counts as a “fact” depends on the authority relied on. For instance, it is a fact that the earth is over 4 billion years old only when one relies on the authority of science. But not if you rely on a literal interpretation of the Bible. Then it is, perhaps, 6 to 8 thousand years old.

In too many cases the relied upon authority is the professor him or her self. In other words, they have succumbed to teaching their particular “truth” as the one and only gospel.

I recall debating a colleague in the humanities regarding the definition of romanticism. He insisted that his definition was the only correct one even when I showed him other definitions in the Oxford English Dictionary. He even refused to expand his definition when I demonstrated that F.L. Lucas actually identified 11,936 different meanings in his Decline and Fall of the Ideal of Romanticism (1948). When that kind of false certainty is taken into the classroom, indoctrination is assured.

In disciplines such as science, mathematics and engineering, the matter of authority is relatively unproblematic.  These disciplines properly rely on the consensus of their academic community. But things are not so straightforward in the arts. Here there is more debate and disagreement; and, consequently, more room for indoctrination.

We should keep in mind, though, that students can compare the gospel according to Professor Smith with the gospel according to Professor Jones and reach their own conclusions. Indoctrination is maximally effective only when all disagreement is expunged. For instance, in schools such as Liberty University or Oral Roberts University the Bible, as interpreted by one or another preacher, is the ultimate authority. Hence the physical universe is officially designated as the direct creation of God —the one and only great designer and lawgiver. Consequently, life science professors must teach the “true belief” that the man-made concept of evolution is patently false.

Should life science professors give equal time to creation “science” in order to avoid indoctrination? (You might recall George W. Bush advocated this when he was President.) No, because creation “science” is not science, but religion. Why? Because it relies on an a piori faith commitment rather than empirical evidence.

That is why schools that teach creation “science” and the supremacy of the Bible over all other forms of knowledge are not institutions of higher education, but institutions of more elaborate indoctrination. Liberty University and Oral Roberts University come immediately to mind.

Successfully teaching someone to do something, that is to actually embrace it, is orders of magnitude more difficult than teaching them how to. It can come down to fostering a deep and abiding love in students for what they are learning to do. Imagine a ballerina who practices until her feet bleed because while she was learning how to dance, she also was learning to dance.

This also applies to just teaching someone how to read, versus teaching them to read. The later occurs when a student reads because he or she wants to. They have learned to enjoy reading for its own sake. The teacher who accomplishes this transformation deserves special respect.

Does teaching to require indoctrination? Not when it is the artful fostering of a love or passion. Unfortunately, artful cultivation is not the only way to foster a deep passion — particularly if it is religious or political. The other way involves daily programming, preferably from early childhood, in isolation from competing messages. Doubt and dissent are unwelcome — even punished. Students are repeatedly told how they should think, act and feel. Shame and guilt are instruments of control; and students are encouraged to believe that they are being inducted into a special group that stands apart in important ways from the great mass of humanity. What kind of teaching is this? It is indoctrination, in spades.

Education and indoctrination are two very different things. They both involve teaching and learning. But that is where the similarity ends.