HOW MULTICULTURAL SHOULD OUR SCHOOLS BE? 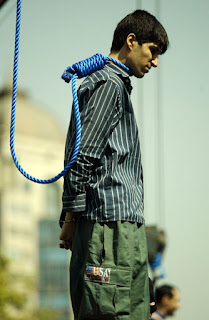 ABOUT TO BE KILLED FOR "CRIMES AGAINST GOD"
Immigrant children are flowing into our schools from all over the globe. And they bring with them a bewildering, often conflicting, variety of cultural beliefs and practices. Teachers have to deal with a new, multi-cultural America that is struggling to life in their classrooms generating multiple problems and unique opportunities.
What help do front-line teachers receive in the face of this? Often little more than warm, fuzzy slogans issued by administrators who are safe in the rear. These rear echelon commandos generate simple-minded slogans in which conflicted polyglot schools are magically transformed into multicultural rainbows where “You can be you and I can be me.” Would that it were that simple.
Why can’t our public schools be happy multicultural rainbows? For one thing, because the cultural values brought into the schoolhouse often are at odds with one another. For another, they are often incompatible with core American values. Take, for crucial instance, the very tolerance that makes multiculturalism possible. It can be totally at odds with many cultures of origin.
Consider Iran, for instance. Their theocracy lives and breaths intolerance. It publicly hangs citizens for "crimes against God." (That essentially means discomforting the clerical establishment.) They also mercilessly persecute the entire LBTG community. Then there's the Afghan Taliban who just banned females from any schooling beyond the 6th grade. Does any of this dovetail with schools that are multicultural rainbows? Does any of this fit the fabric of American democracy?
Remember too, some cultures define themselves in terms of animosity or distain for others. The antagonism between Israeli Jews and Palestinian Arabs, Afghanistan's Hazzara and Pashtun, or Catholics and Protestants in Ulster comes to mind. Or how about Hindus who regard some of their fellow Indians as so repulsive as to be literally untouchable.  How does any of this fit in a cultural rainbow?
Apparently, the most enthusiastic advocates of multicultural education have rarely thought about such things. In fact, they don't seem to think very much at all. For them, multiculturalism is a topic for emoting, not thinking.
No doubt aspects of an immigrant's native culture can, often do, make a valuable contribution to American culture. Our way of life has been enriched in that way many times over. But the fact remains that some foreign cultural practices are totally at odds with a tolerance and a,democratic way of life. If, for example, we value free and unfettered expression, or if we think that women’s rights should equal those of men, the native cultures of many immigrants stand in stern opposition.
Remember too, lots of immigrant children do not want to be defined by their parent’s native culture. They long to escape those confines and join mainstream America. Should educators help that happen? Or should they join forces with their parents to keep these kids in the old-world fold?
The core reality of all of this is that multicultural education is much more problematic than its evangelists would have us believe. Any careful consideration of multi-culturalism inevitably turns from simple-minded tolerance to thoughtful reflection. That, not the current pablum about multicultural rainbows, must guide educational practice and school policy. Otherwise frontline teachers are left twisting slowly in the wind.

To further examine this and similar educational issues, see articles at www.newfoundations.com