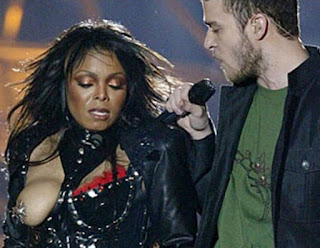 A while back I addressed Janet Jackson’s Super Bowl “wardrobe malfunction.” You'll recall this brief view of her boob, a pasty covering the nipple, created such a furor that Congress, the FCC and the Supreme Court got involved.

Complaints about the incident repeatedly emphasized, "children were watching!" So what? Why is a kid getting a very brief glimpse of a nearly bare breast so upsetting when, by the time they complete elementary school, the average U. S. child has watched some 8,000 murders on TV. Yep, that's right, eight thousand! And we're not even counting movie murders or the killings depicted in electronic gaming.

Routinely exposing children to murder as entertainment generates little to no public protest. Yet a momentary glimpse of a boob get's the nation's bowels in an uproar? What in the world is one to make of that?  Who but a moral cretin, the Rev. Franklin Graham comes to mind, thinks that feigned murder of a fellow human being is acceptable, while a very brief glimpse of a breast, with nipple covered, is grounds for outrage? Murder as entertainment generates a great deal of money for some people who count? But in what other way is this beneficial?

Sure, kids know that TV, movie and electronic media murders aren't real.  Nevertheless, what are they learning by living in a culture where the staged depiction of murder is entertainment? Also ask yourself, what kid's learn about sexuality when a breast bared for a fraction of a second creates a national furor? Healthy that ain't.

Here's an actual incident that first got me thinking about this. One morning my wife and I were walking to our car when some young boys next door made believe they were shooting me. I know, boys often do that sort of thing. But let's broaden our view of it a bit. Suppose, instead of pretending to murder me, they had mimicked having sexual intercourse with my wife. Let's imagine they were pointing at her and thrusting their butts. Imagine how the boy's mother would have reacted if I informed her that her were doing that. She would have been mortified. But had I expressed concern about her boys were pretending to murder me, she would have thought me tetched. Why? How come kids mimicking a pleasurable act is utterly unacceptable, while mimicking murder is amusing? What sort of weird cultural values does this reflect?

Most of what shapes a child's sense of right and wrong is caught rather than taught. By that I mean, kids absorb how to behave and what to value just by living in a certain environment. Now, what do you think they are absorbing by watching and playing at murder? Is this wise and worthy of their promise? And as for this puritanical attitude regarding human sexuality that they absorb, how wise is that? No wonder we've got all sorts of sexual deviants running about.

So, am I far out in left field on this? Or does what I'm saying make sense? Please comment.