HIGHLY QUALIFIED TEACHERS? you've got to be joking 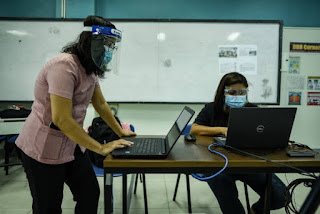 If you enjoy comedy, you might like to savor this situation. It represents the very bottom in ineffectual teacher entrance requirements. Some states, Arizona comes to mind, have eliminated the college-degree requirement; and are importing teachers from the Philippines. Yes, they're staffing their schools with non college graduates and green card holders from the Philippines! Why would they do that? Because far too many well-educated Americans have come to regard teaching as strictly for losers. And because too many Arizonans don't really care what happens to other people's children.
One hopes these foreign teachers are at least able to communicate and speak some semblance of American English. (Though such a requirement might be too stringent, given the present urgent need for teaching cannon fodder.)
The history of hiring under-qualified, excessively servile people to teach in our public schools dates back to their very beginning. But then we could rely on bright, hard-working women to teach our kids because they had few other opportunities. Secretary, nurse, teacher, housewife, that was it. Although the decision making ranks remained overwhelmingly male.
When females were presented with new opportunities there ensued a crises that has never been remedied. Although there has been a whole lot of hot air directed at the problem. Remember when former President Obama's Secretary of Education and basketball buddy, an utterly unqualified guy named Arne Duncan, toured the country publicly wringing his hands about the urgent need to improve teacher preparation. He, himself, lacked even rudimentary training or experience in education. But he still was distressed to find that many teacher aspirants were as poorly prepared for their job, as he was for his.

Was Secretary Duncan worried about a Bush-era ruling falsely classifying thousands upon thousands of would-be teachers still in training as "highly qualified?"  ("Highly qualified" teachers were required by the federal No Child Left Behind law.) No, no, no!. Arne wasn't worried about that at all. In fact, under his 'leadership,' the Education Department continued to apply the Bush administration's ridiculously weak standards. And when a federal judge ruled that this anemic policy clearly violated the No Child Left Behind "highly qualified" requirement, President Obama quickly signed a bill lowering that NCLB standard to the equivalent of breathing. This, predictably, the issue of a man with an elite private school education.
Just what was "highly qualified" supposed to mean before Obama completely castrated it? The law stipulated that if you wanted to teach math, science, social studies, the arts, reading and languages you must have obtained a long-term license; and demonstrated your subject matter knowledge by either obtaining a college major in the subject, by passing a test in the subject taught; OR (and here's the kicker)" by some other means established by the state."
That's right; every state was allowed the escape valve of deciding what "highly qualified" meant for them. This was necessary to protect state's where teaching has long been is so underpaid, under-respected and under-appreciated that the only qualification they can realistically impose is the ability to pee a hole in snow. This "by some other means" wording, in effect, rendered all the preceding requirements meaningless.
Only in the lala land of public school policy could such a weak-kneed, ill-defined requirement be taken as too tough. Yet, both the George W. Bush and Barack Obama administrations thought it necessary to further weaken this already eviscerated requirement.

For all practical purposes this' half-cocked, weak-kneed approach is still extant. In fact, things have actually gotten worse since the far right began systematically undermining faith in our teachers and public education while the far left tries to impose it's brand of political indoctrination.
Abandon hope if you favor the tough, high quality teacher preparation our schools desperately need. Thanks to both democrats and republicans, that dream has metamorphosed into either a nightmare or an obscene joke. Take your pick.