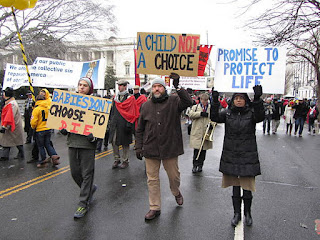 We'll get to the anti-abortion crusade in just a bit. But first, let's set the stage. Remember Janice Jackson’s Super Bowl "wardrobe malfunction?" National television viewers got a very brief glimpse of one of Janice's boobs and the usually inert U. S. Congress sprang into action. They hurriedly convened a high-level hearing to investigate this moral outrage that some wags were already calling “nipplegate.” During this congressional circus a host of lawmakers, each pretending grave moral outrage, took turns climbing out of the congressional clown car to confront network executives and pressure the FCC to crack down on anything that might provoke sexual arousal.

Puritanical posing is a standard feature of American politics. Our politicos have hitched a ride on America’s sexual hangups as far back as the 1870's. That's when congress joined forces with Anthony Comstock, then the nation’s self-appointed moral policeman, and suppressed access to anything that might free women from unwanted pregnancy; or, heaven forbid, increase sexual knowledge and/or pleasure.

Comstock was the founder of the powerful New York Society for the Suppression of Vice. (You may be reminded of Saudi Arabia's present-day "Commission for the Protection of Virtue and Suppression of Vice.") Blocking access to information about birth control was Comstock’s chief objective. He also wanted to stifle access to information about abortion. And while he was at it, he set out to eliminate “obscene” books (including serious novels) “dirty” pictures, sex toys and anything else he thought contrary to God’s word — as he interpreted it.

Comstock launched his society's activities by commencing highly publicized vigilante raids on luckless retailers. He "confiscated" and handed over to the police hundreds of purloined “bad books” and “articles made of rubber for immoral purposes and used by both sexes.” (One wonders what the police did with them.) Then, emboldened by the success of this larcenous campaign, Comstock began a national crusade to criminalize sex education, birth control, abortion (except to save the life of the mother, but more on that later) sex toys, racy illustrations and “bad books.”

His crusade was hugely successful. In fact in 1873 Congress joined in by passing, without debate, the Comstock inspired, "Act for the Suppression of Trade in, and Circulation of, Obscene Literature and Articles of Immoral Use." This draconian federal law defined sex education, particularly as it pertained to preventing conception, as "obscene." Here is an excerpt: “Whoever … shall sell, or lend, or give away, or in any manner exhibit … or shall otherwise publish … or shall have in his possession, any obscene book, pamphlet, paper, writing, advertisement, circular, print, picture, drawing or other representation, … or instrument … of an immoral nature, or any drug or medicine, or any article whatever, for the prevention of conception, or for causing unlawful (emphasis added) abortion, or shall advertise the same for sale, … shall be deemed guilty of a misdemeanor, and, on conviction thereof, he shall be imprisoned at hard labor in the penitentiary for not less than six months nor more than five years for each offense, or fined not less than one hundred dollars nor more than two thousand dollars, with costs of court.”

This U. S.  law also specified that it was a crime to send any "obscene" materials through the mail. That provision led to a government sinecure for Comstock. He was anointed a special agent of the US Post Office with exclusive enforcement powers over the "morality" of the nation's mail. He held this position, — in essence, America’s sexual morality czar — for the next 42 years.

In this role Comstock was able to prosecute anyone sending information about birth control, or committing any other "sexual offenses,” via the mail. And he was zealous in so doing. Upon retirement Comstock boasted that he had victoriously successfully brought charges against more than 3,600 defendants and destroyed 160 tons of "sexual materials." And remember, that included information about birth control, since that was officially "obscene."

Of course this law only covered items sent via the mail. But Comstock, a zealous fellow, wasn't content with that. He moved on to push for state laws far transcending postal matters. In the following years Comstock successfully campaigned for the passage of draconian morality laws that were eventually enacted in every state in the union.

A crusading Comstock even provoked a famous suicide. That's when feminist Ida Craddock killed herself rather than be imprisoned for sending sex education information by mail. Her suicide note reads, in part, “I am taking my life because a judge, at the instigation of Anthony Comstock, has declared me guilty of a crime I did not commit -- the circulation of obscene literature. Perhaps it may be that in my death, more than in my life, the American people may be shocked into investigating the dreadful state of affairs which permits that unctuous sexual hypocrite Anthony Comstock to wax fat and arrogant and to trample upon the liberties of the people, invading, in my own case, both my right to freedom of religion and to freedom of the press." Thus ended the life of a feminist sex education pioneer. Hundreds of others ended up in federal prison.

Were there any limits to Comstock's zeal? Apparently, a very limited one. He once was asked by an interviewer, "Do the laws ever thwart the doctors work; in cases, for instance, where pregnancy would endanger a woman's life?"  Comstock replied: "A doctor is allowed to bring on abortion in cases where a woman's life is endanger (sic)." But then he added "... is there anything in these laws that forbids a doctor telling a woman that pregnancy must not occur for a certain length of time or at all? Can they not use self-control? Or must they sink to the level of the beasts?"" (Harpers Weekly, Birth Control and Public Morals; Mary Alden Hopkins. May 22, 1915)

So how far has America come since Comstock? Is the current torrent of anti-abortion legislation a piece of the same Comstockian pie? Is there a dime's worth of difference between the present-day politicians pushing this cause and Comstock's law-making confederates some 150 years ago? You decide.